Microbe Management in Winemaking: How to Avoid Contamination - Enartis

Microbe Management in Winemaking: How to Avoid Contamination 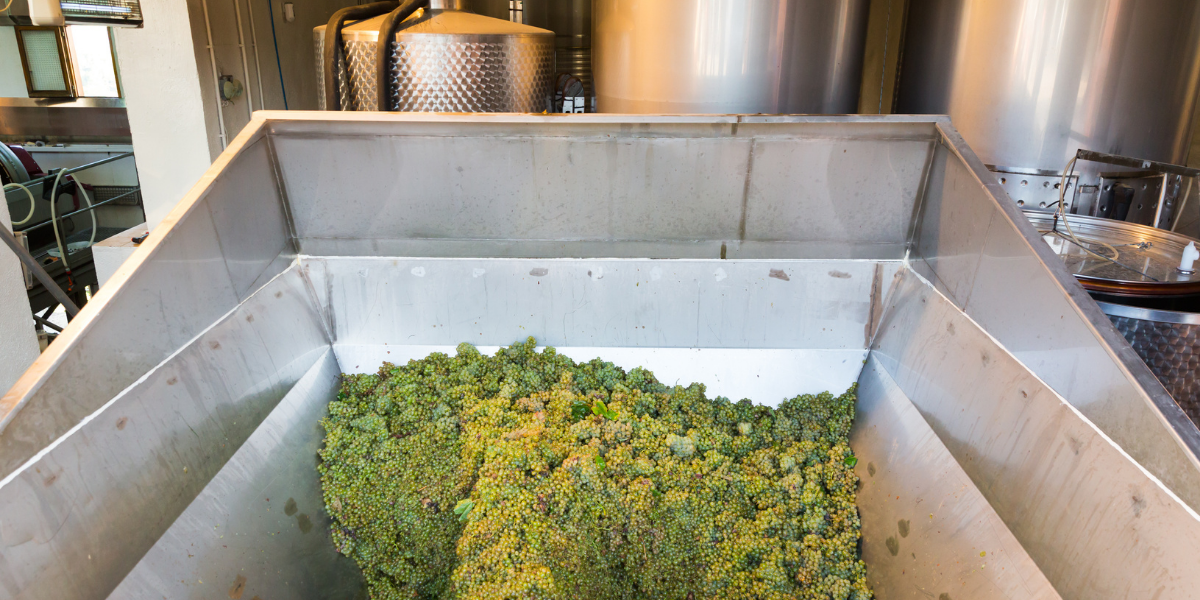 Microbial contamination can have major negative effects on wine quality. You can now avoid them with EnartisStab Micro and Micro M.

Wine is an alcoholic beverage with low pH which limits the number of potential microorganisms. However, it can be affected by two large types of microorganisms: bacteria and yeast. They can also come from grapes and can contaminate wine via equipment, poor sanitation or other ways.

Why are we so concerned with wine microbes? Why do we want to manage microbial activity in wine? What are the risks if microbes are not controlled? Here are some answers:

DO YOU WANT MORE INFORMATION?

Contact us by filling out the form to receive information about the product, delivery times and prices. 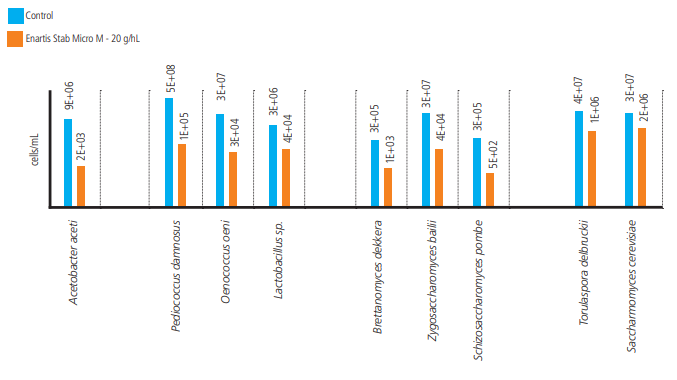 How to manage microbes: Use of Activated Chitosan

Produced from the partial de-acetylation of Chitin (extracted from Aspergillus niger), chitosan is a cationic polysaccharide that interacts with a wide spectrum of microorganisms, alters their cell wall permeability, inhibits cell growth and leads to cell death. The antimicrobial activity of chitosan is attributed to its positive charges (NH3+ groups) that interfere with the negatively-charged residues of macromolecules on the microorganism’s cell membrane surface. Enartis’ production process is focused on improving the efficiency of chitosan by increasing the molecule charges, solubility and surface contact. Chitosan-based products, EnartisStab Micro M and EnartisStab Micro are selective, allergen-free fining agents that eliminate populations of a large number of unwanted microorganisms, such as Brettanomyces, lactic acid bacteria and acetic acid bacteria.

EnartisStab Micro M (activated chitosan and purified yeast hulls) is specifically developed to control spoilage microbe populations in turbid environments such as juice, fermenting must and press fractions. It is used to manage bacteria populations on compromised fruit, limit non-Saccharomyces yeast development during cold soak and to delay or stop malolactic fermentation after alcoholic fermentation as an alternative to lysozyme.EnartisStab Micro M is the only chitosan activated through a patented process that increases the positive charge and contact surface amplifying the antimicrobial action.

EnartisStab Micro (activated chitosan) is highly effective in controlling spoilage microorganism development in aging wines after malolactic fermentation. Use EnartisStab Micro as a treatment to remove high levels of contamination with a 20 g/hL dose or as a preventative to remove potential contamination with a 2-4 g/hL dose during racking after MLF. 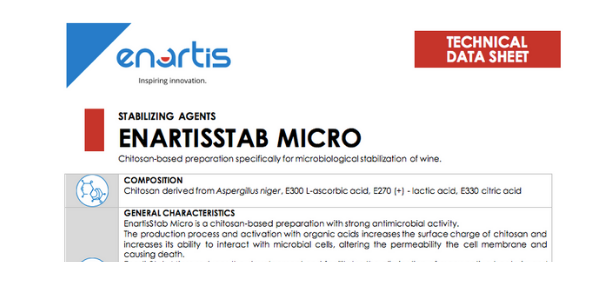 EnartisStab Micro is a chitosan based preparation with strong antimicrobial activity. The production process and activation with organic acids increases the surface charge of chitosan and increases its ability to interact with microbial cells, altering the permeability the cell membrane and causing death. 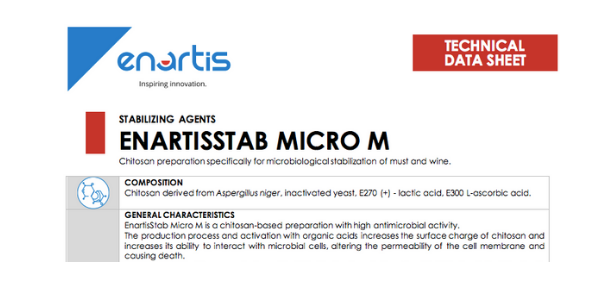 EnartisStab Micro M is a chitosan based preparation with high antimicrobial activity.The production process and activation with organic acids increases the surface charge of chitosan and increases its ability to interact with microbial cells, altering the permeability of the cell membrane and causing death. 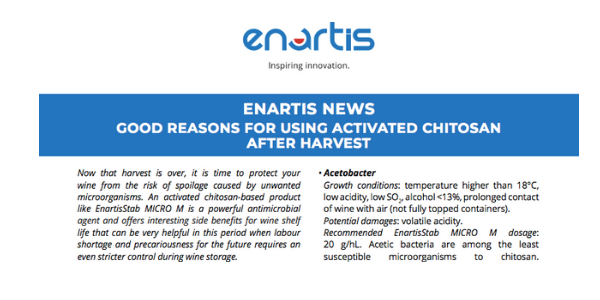 Now that harvest is over, it is time to protect your wine from the risk of spoilage caused by unwanted microorganisms.

DO YOU WANT MORE INFORMATION?

Contact us by filling out the form to receive information about the product, delivery times and prices.