Enartis News - Reasons to use activated chitosan during harvest | Enartis

Enartis News – Reasons to use activated chitosan during harvest

Activated chitosan can perform various activities that make its application during harvest particularly beneficial for wine quality:
• It is a powerful, wide spectrum antimicrobial agent
• It removes oxidizable catechins and pro-oxidant metals such as iron and copper
• It reduces wine volatile phenols and sulfur compound content

EnartisStab Micro M is an allergen-free, veganfriendly bioregulator containing activated chitosan
and yeast hulls rich in chitin-glucan. It was specifically developed for the treatment of turbid must and wine; therefore, it is especially recommended for the early stages of wine production, from harvest to the end of malolactic fermentation.
Its powerful antimicrobial activity is the result of the pre-activation process used by Enartis during production. In fact, chitosan’s antimicrobial activity is attributed to its positively-charged surface that interferes with negatively-charged residues on microorganism cell membrane surfaces and alters the membrane permeability resulting in cell death.
This pre-activation significantly increases the molecular charge and contact surface of chitosan,improving its capability of inhibiting microorganism growth. This is why EnartisStab Micro M can control the development of numerous contaminants during different stages of vinification. 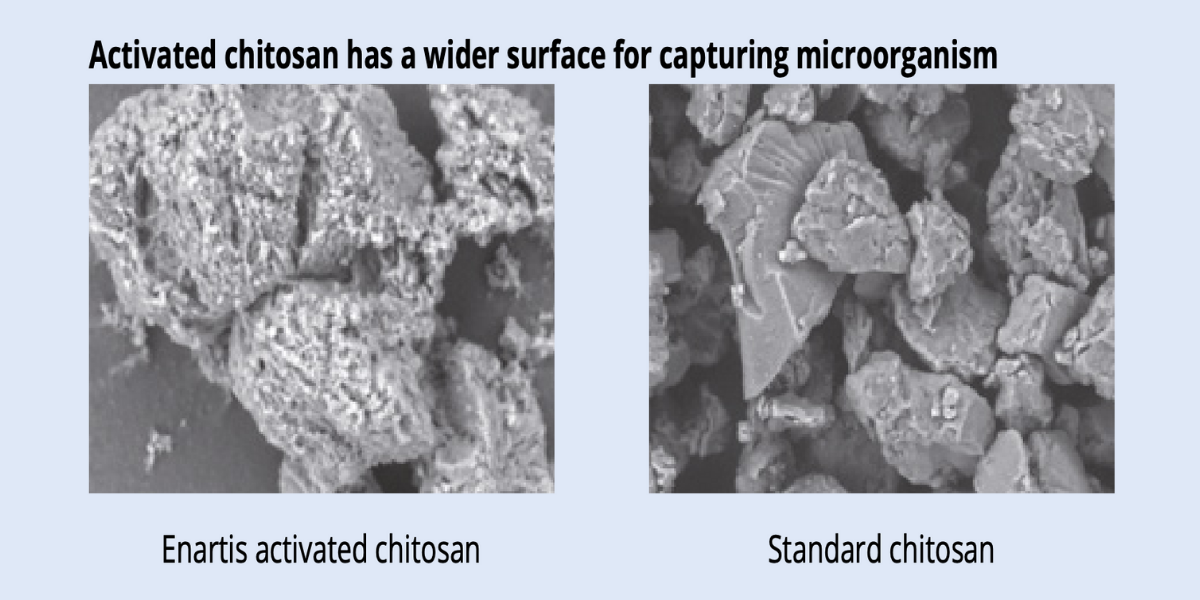 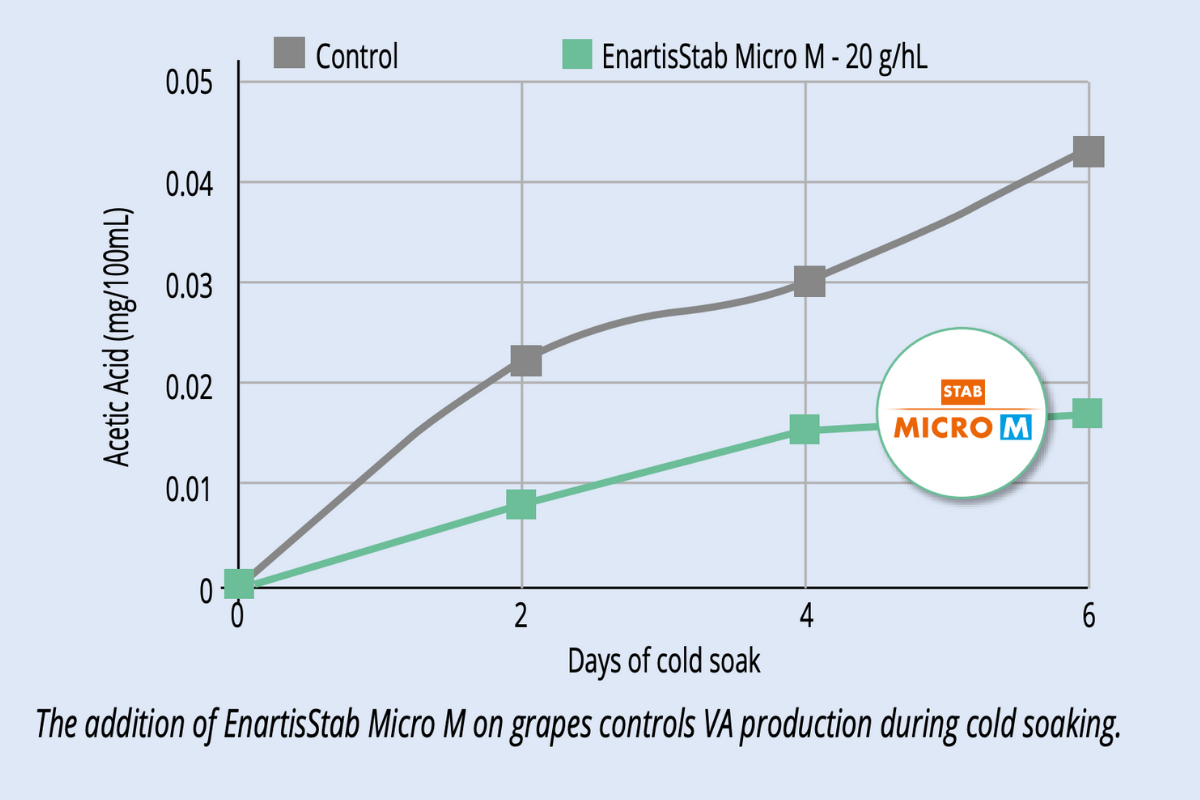 EnartisStab Micro M limits laccase activity. The mechanism is not yet known, but there are various hypotheses: removal/inactivation of laccase (negatively charged) by direct interaction with chitosan (positively charged); removal of copper (pro-oxidant and pro-oxidase metal); removal of oxidation substrates (catechins). Whatever the mechanism, the fact is that the use of EnartisStab Micro M reduces browning and preserves aromatics and color intensity. 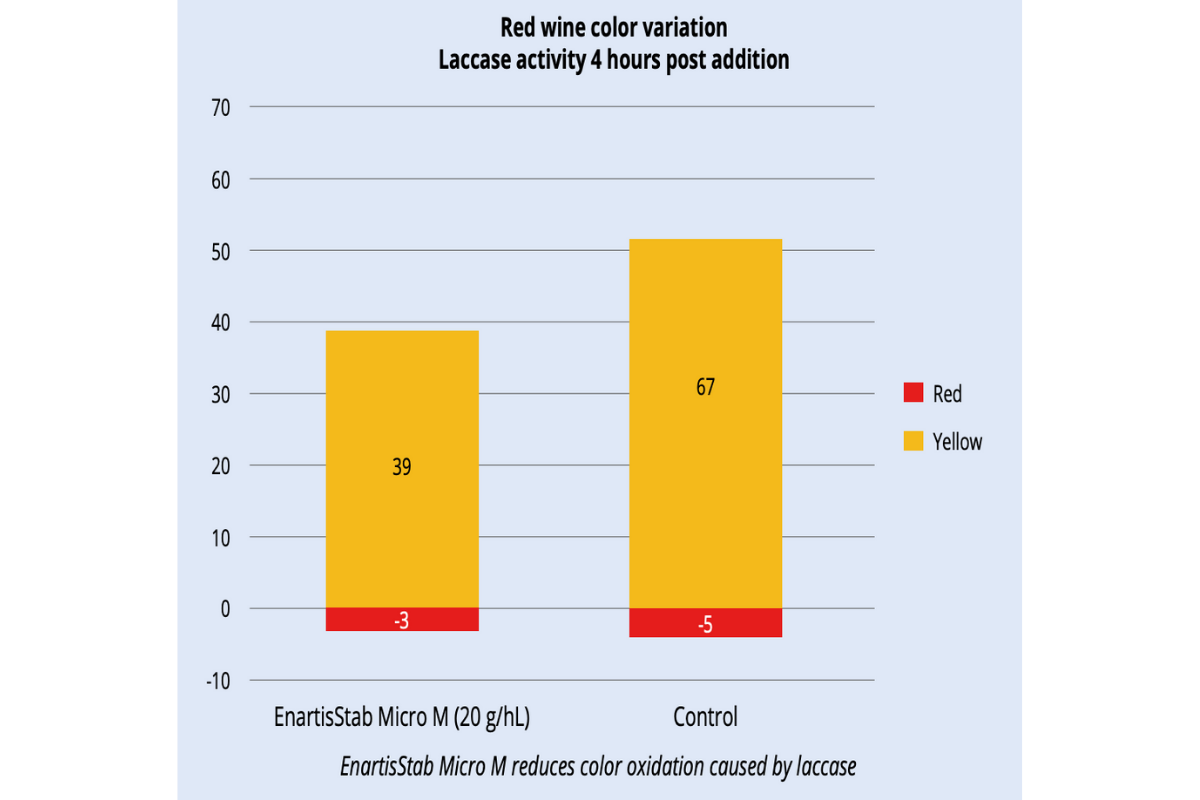 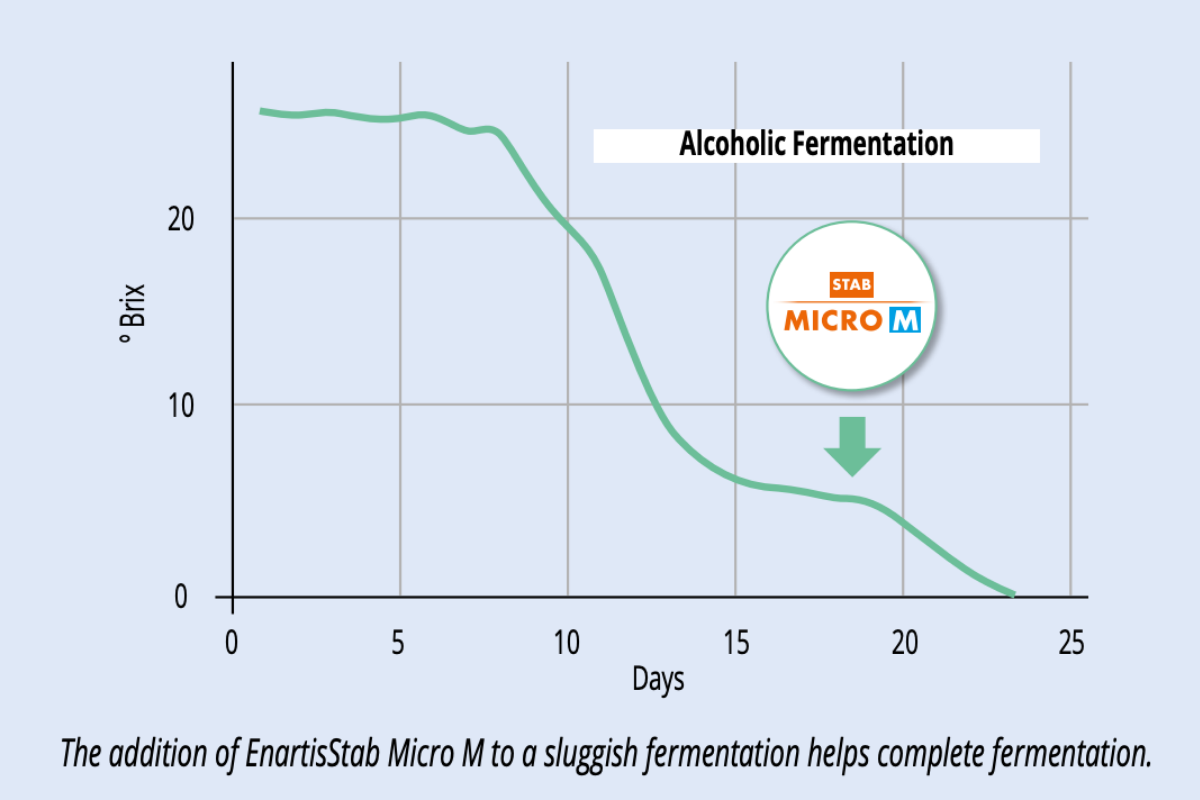 At the end of alcoholic fermentation EnartisStab Micro M:
• Can be used as an alternative to lysozyme to delay or avoid MLF with the additional advantages of being an allergen-free compound, vegan-friendly, and having no impact on protein stability or color.
• Can be used to prevent the formation of H2S and preserve a larger quantity of free SO2. Fermenting yeast remain alive for at least 10-15 days after the completion of alcoholic fermentation. An addition of SO2 done in this time period will activate yeast enzymatic pathways that will lead to the formation of H2S and SO2 binders, mainly acetaldehyde. These two mechanisms help yeast turn SO2 into less harmful compounds but create two enological problems: appearance of reduction and increase of bound SO2 content. The use of EnartisStab Micro M allows for postponement of sulfur addition by at least 2 weeks while ensuring wine is protected from spoilage microorganisms. 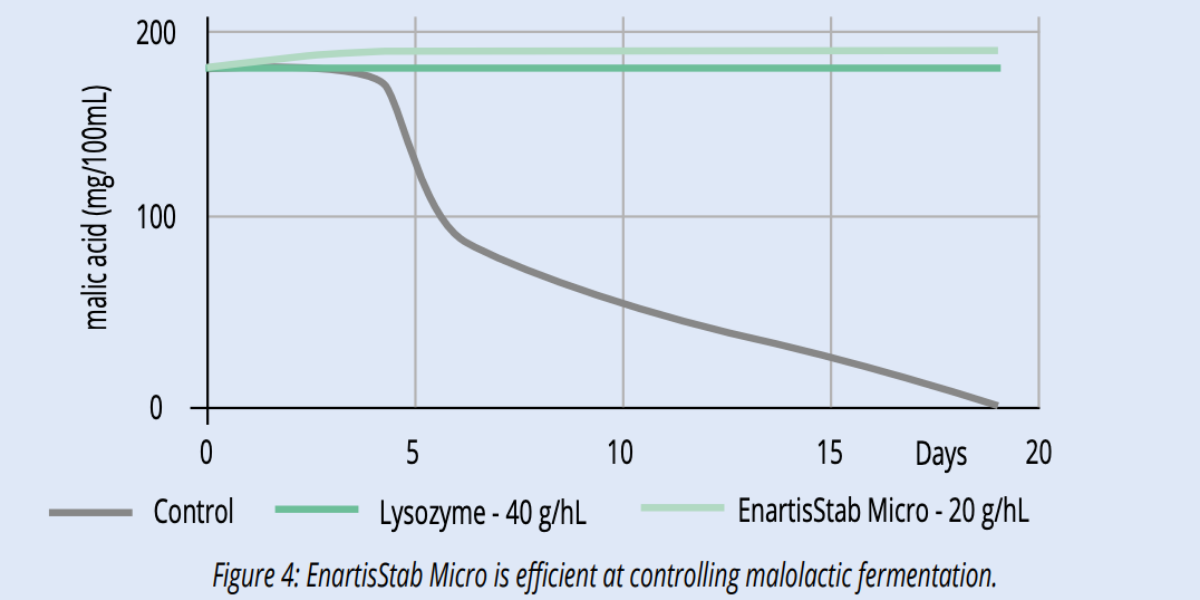 At the end of malolactic fermentation EnartisStab Micro M:
• Can be used to preserve a larger quantity of free SO2. Lactic acid bacteria can degrade the acetaldehyde that
is produced by fermenting yeast. Degradation mainly takes place in the 2-3 weeks after malic acid depletion. This means that an early addition of SO2 after malic acid depletion, can turn into the bound form by up to 80%. To fully take advantage of malolactic fermentation’s contribution towards decreasing the total SO2 level, delaying SO2 additions by 7-10 days after malolactic fermentation completion is advised. EnartisStab Micro M allows for postponement of sulfur addition by at least 2 weeks while controlling the growth of spoilage microorganisms, mainly Brettanomyces. 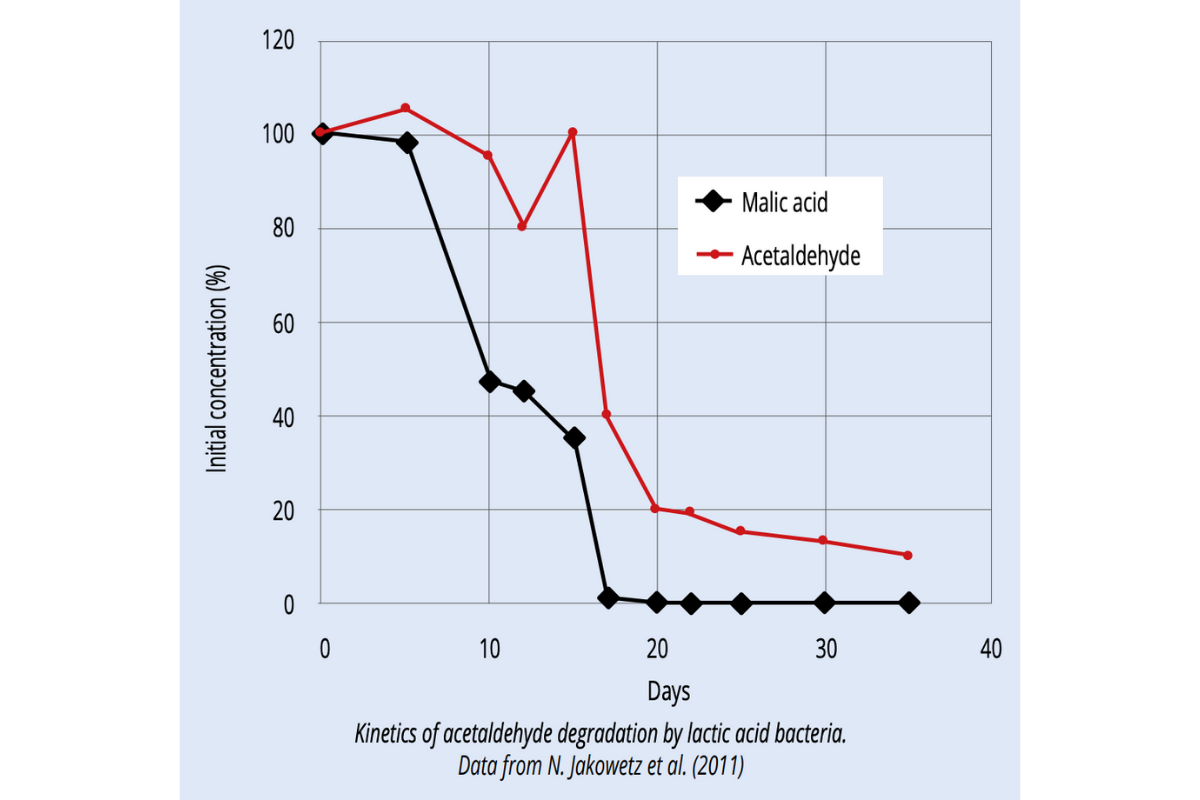 Promote quality natural fermentations
Natural fermentations can be used to produce unique wines due to the contribution of wild yeast strains naturally present on grapes or in the cellar; nevertheless, this practice is not without risks. The dominance of yeast with poor enological attributes
can lead to stuck fermentations or production of wine faults. Taking advantage of Saccharomyces cerevisiae and Torulaspora’s low sensitivity to chitosan, EnartisStab Micro M can be added to must to help the dominance  of the best fermenting yeast over non-Saccharomyces yeast and bacteria, as well as increase the chances of a clean, regular and complete fermentation. 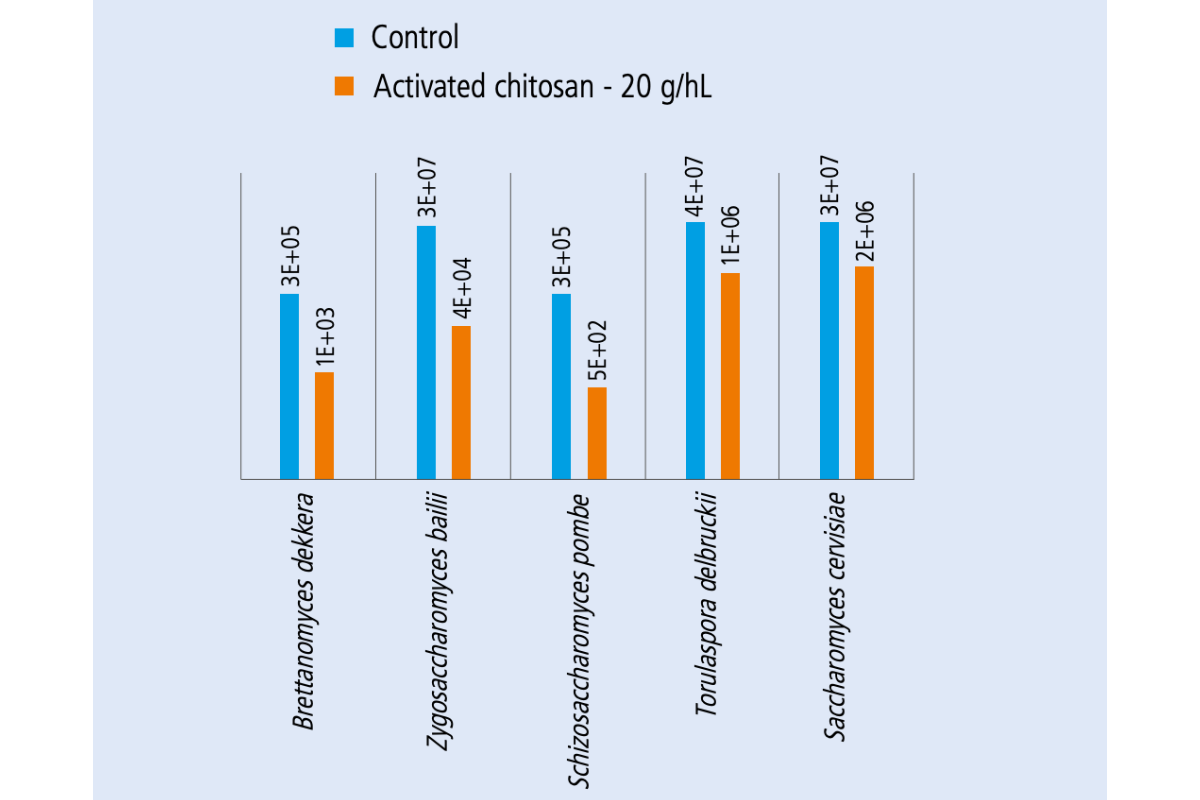 EnartisStab Micro M has minimal impact on fermenting yeasts such as Torulaspora Delbruckii and Saccharomyces cerevisiae, while it is very effective in reducing the population of spoilage species.

Reduce or eliminate the use of SO2
EnartisStab Micro M can partially or completely replace sulfur dioxide additions. In fact, along with its antimicrobial activity, chitosan performs its own antioxidant action. It has the capability of reducing browning, pinking and loss of aromatics as well as
preventing the increase of acetaldehyde, due to its capability of chelating copper and iron that activate the oxidative process.