Enartis News – EnartisFerm ES U42: the art of Amarone winemaking for all types of wine - Enartis

Enartis News – EnartisFerm ES U42: the art of Amarone winemaking for all types of wine

EnartisFerm ES U42 is a yeast blend consisting of a cryophilic strain of Saccharomyces uvarum species and a strain of Saccharomyces cerevisiae ex ph. r. bayanus, modelled on a spontaneous fermentation of Amarone.
Amarone della Valpolicella is a dry wine made from grapes harvested in September/October and dried in the cellar until late winter.
Therefore, crush and fermentation take place during colder months and, according to tradition, without the use of heating systems. Microbiological studies have shown that the spontaneous fermentation of Amarone is the result of a rotation of different species of yeasts: the first to ferment are strains of the cryophilic species Saccharomyces uvarum, followed by strains of Saccharomyces cerevisiae, more tolerant to ethanol, but less active at low temperatures (Table 1).

Hence, the idea of a Saccharomyces uvarum – Saccharomyces cerevisiae blend is to produce wines with some traits that characterize Amarone:

The following are the main enological characteristics that were found by comparing the performance of EnartisFerm ES U42 with the individual species in the
blended product:

The high production of glycerol (Figure 1), makes EnartisFerm ES U42 particularly interesting for the production of wines with a high alcohol potential.
Glycerol reduces the burning sensation of alcohol, and softens astringency of higher tannin wines. 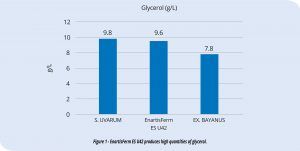 The chemical analysis carried out during and at the end of alcoholic fermentation shows extremely low volatile acidity production (Figure 2) in relation to the
final alcohol content (Figure 3).

Another characteristic of EnartisFerm ES U42 is the ability to produce 2-phenylethanol, an aromatic compound responsible for the hint of rose (Figure
6), in quantities that increase aromatic complexity and enhance fruity notes without masking varietal character. 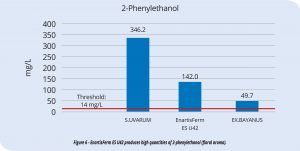 Saccharomyces uvarum species have very interesting enological properties – production of high quantities of glycerol, low quantities of volatile acidity and maintenance of total acidity – but also some shortcomings such as low alcohol tolerance and some overexpressed characters such as the excessive production of 2-phenylethanol and succinic acid that could overshadow other qualities of a wine. By reproducing what naturally occurs in the fermentation of Amarone, one of the greatest Italian red wines, the creation of a balanced blend of Saccharomyces cerevisiae, ex r.f. bayanus maintains the positive characteristics of the Saccharomyces uvarum species and compensates for any deficiencies.

This is why EnartisFerm ES U42 was created, an expression of the most interesting characteristics of the two species in the blend:

RECOMMENDED APPLICATIONS OF ENARTISFERM ES U42